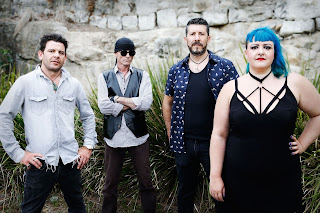 The Dirty Earth, born in 2012, has gone from strength to strength redefining themselves to create their own brand of heavy blues based stoner rock. This Sydney based quartet lead by founding member Raff Iacurto has evolved into a song-writing machine combining elements of 70’s stoner rock and blues. Non-stop gigs in their hometown of Sydney and surrounds has seen the band cement themselves rather nicely into the Australian live rock music scene.

Their 2013 EP - Road to Ruin, an independent release allowed the band to test their skill in the studio and capture their live energy on tape. Enjoying the recording process they quickly regrouped, finding their feet with the debut album, Autonomic landing in 2014 and saw it voted in the 2014 top 10 Hard Rock releases by Heavy Music Magazine.
In 2016, the band’s next album Ascendancy was released to a rapidly expanding fan base, but unfortunately the band was hit with the mother of all asteroids. They needed to find a new singer and the search began…

Ascendancy showcased an uncompromising band allowing the creative juices to flow as guitarist Raff Iacurto, drummer Leon Cadden and bass player Darren Staite continued to work on new material as they searched for a new vocalist. The universe was kind to The Dirty Earth. Enter Tenille Rogers. She quickly learnt the songs and made them her own. The band successfully toured the Ascendancy album from May to December, making 2016 the most successful in the bands history to date.

With Tenille at the mic The Dirty Earth are set to reach new heights. A sensational vocalist who can belt out a melody with the best of them. Sultry bluesy overtones and gospel of soul in her veins have her gaining new fans with every show.  Raff flicks earth shaking riffs off his fingers, having honed his sonic storms up and down the East Coast in legendary band Thumlock. His unmistakable sound and riffs make him the envy of many a guitarist. Darren, lays down dirty, monster, grooves that thunder and roll like a hurricane, as solid as they come and locked into the drummer like a match made in heaven. Behind the kit is Leon, a machine of a drummer. This guy is often quoted as one of Australia’s best and it’s not hard to see why as he continues to push the band out to the edge live and the same goes for in the studio.

The Dirty Earth’s appeal has stretched beyond their ability to put together rockin’ songs, reaching audiences far and wide that are rediscovering their love of classic rock music but looking for an original band that can deliver retro vintage blues rock with a modern twist. This band are the real deal, seasoned muso’s who have been around the block, with their best yet to come.

2017 sees The Dirty Earth’s launch themselves into the stratosphere with the release of their third studio album titled ‘Aurora’.

“Ascendancy is a 45-minute tour-de-force that never outstays its welcome, and is up there with any retro rockers on the world stage”
-        100 Percent Rock Magazine